The decarbonisation of the energy system is key for achieving long-term sustainability of the European society. Major actions should be taken to ensure secure, sustainable, affordable and competitive energy for households and industry. Achieving this goal will require a fundamental transformation of Europe’s energy system. The energy sector – and the electricity sector in particular – has already dramatically evolved since the turn of the century. In its 2020 and 2030 climate-energy packages the EU has committed itself to lower GHG emissions and to higher shares of renewables and interconnection levels. These goals are being achieved (e.g. almost 30 % share of renewable electricity in gross electricity consumption in 2015, up from 16 % in 2007) and continued growth is expected. On the longer term, additional important milestones for this transformation have been set by the European Union. The European Commission’s “Roadmap for moving to a competitive low carbon economy in 2050” suggests that by 2040 the EU should cut GHG to 60% below 1990 levels and to 80% by 2050.

Currently, in Europe alone over 300 coal-fired power plants are operational. The report – “A stress test for coal in Europe under the Paris Agreement”, by climate research institute Climate Analytics shows that emissions from coal in the EU electricity sector need to be close to zero by 2030 (95% by 2030; 100% by 2031), with a quarter of operating coal-fired power plants switched off before 2020 and a further 47% going offline by 2025. This pressure on shutting down coal-fired capacity is not only dictated by the ambitions to limit CO2 emissions, but more urgent due to the implementation of the newest stringent emission rules, compiled in the EU Industrial Emission Directive1. Compared with other parts of the World, Europe’s coal-fired units are simply old. Upgrading those plants, not only the steam generation and use but also applying the prescribed Best Available Technologies (BAT) to arrive at the prescribed emission levels and efficiency, proves economically very challenging. Hence eliminating those plants potentially would benefit the environment not just in terms of reduced levels of CO2 and other emissions (SOx, NOx, particulates, toxic metals), but also makes economic sense. 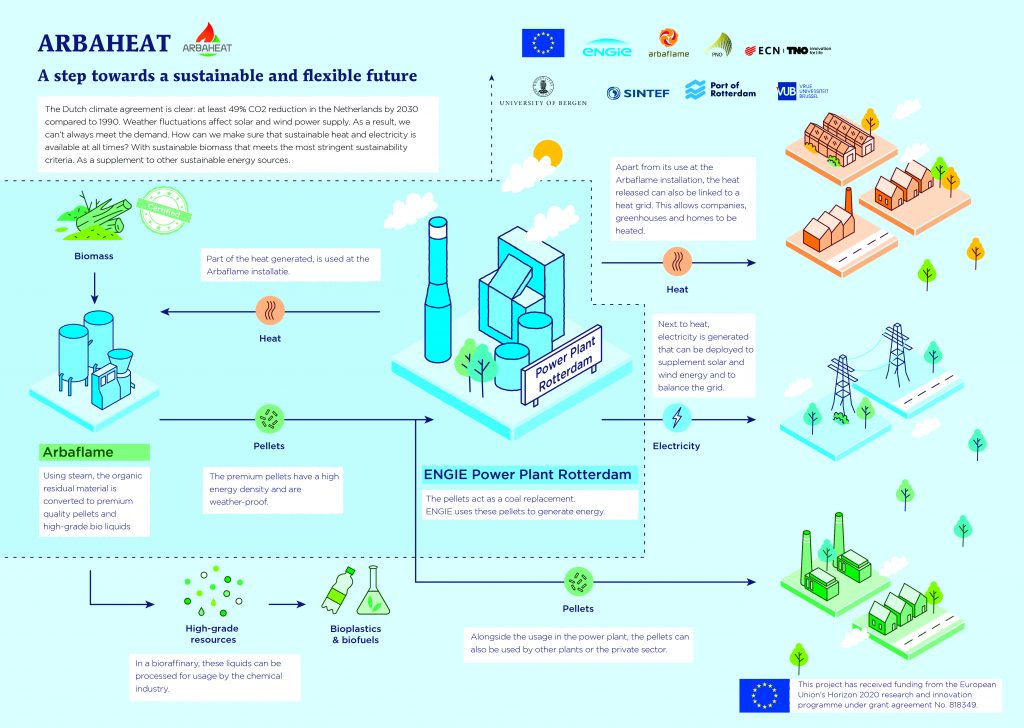 In the ARBAHEAT project an existing 731 MWe Ultra-SuperCritical coal-fired power plant will be transformed into a biomass-fired Combined Heat and Power plant by repowering with thermally-treated biomass produced on-site. This demonstration encompasses:  (1) Transformation into CHP: This will be demonstrated by delivering a minor amount of heat to the on-site biomass treatment process, while envisaging large-volume heat delivery to nearby industry. This will provide renewable local heat, enhancing the overall efficiency of the plant from 46% electricity-only to 70-90% in CHP mode, (2) Biomass feedstock: An integrated thermal pre-treatment process will enable utilisation of diverse sustainable biomass feedstock. This will minimise investment and operating cost while broadening the possibilities in term of geographical feedstock sourcing and quality (3) Biomass pre-treatment: The thermal biomass upgrading process of ARBAFLAME will deliver biomass fuel with handling and milling characteristics approaching that of coal, allowing for retrofitting with minimal adaptations to the existing power plant. The technical capacity of the demonstration plant will allow for maximum flexibility in upscaling the technology for future replication,  (4) Integration into power plant: The biomass pre-treatment and heat delivery system will be physically integrated within the existing power plant. Eliminating several cost and energy intensive steps (steam production, pelletizing) will be investigated, towards more cost-effective final design. This demonstration of an integrated very low-costs concept in large-scale energy production will pave the way to subsequent multiplication in commercial industrial projects, thus increasing the EU capacity for renewable power and heat generation. The renewable ARBAHEAT solution therefore has the potential to significantly contribute to the replacement of fossil-fuel in the heat and power sectors and increase the decarbonisation of the energy market.

For more information or questions